To say that this past week has been eventful, would be putting it mildly. If you were under a rock or disconnected from any media, then let me do a brief re-cap of a few events that occurred:

“All in all this has been a tough week.” #ObamaUnderstatements

During the week’s happenings, many were tuned into the news and social media streams. An even larger percentage of people expressed their thoughts, feelings, and concerns in various social media outlets. As events unfolded in different geographic locations, it was amazing to see people come together to show support for one another. The power of the community and lending a hand has been seen widely in these shared spaces. For example, the #RunForBoston initiative and the Americans for Mariage Equality equal signs could not be missed. Social media affords individuals to get involved, speak up, and share their thoughts.  Both our mobile and connected technologies have the power to make our world smaller and unite a community.

Unfortunately, there is a double-edged sword for this social sharing. With the increase in open, public dialogue comes harsh comments and demonstrations of disrespect. I learned that few often considered other perspectives as social/media streams shared a number of incorrect and inappropriate assumptions, outbursts, accusations, and opinions. It saddened me a bit, and I often stepped away from the screen.

On Tuesday (4/16), I attended the Condoleezza Rice Distinguished Lecture hosted at UNT. My friend @brucebmann said it best when responding to this photo “No matter your politics, she is an amazing speaker.” 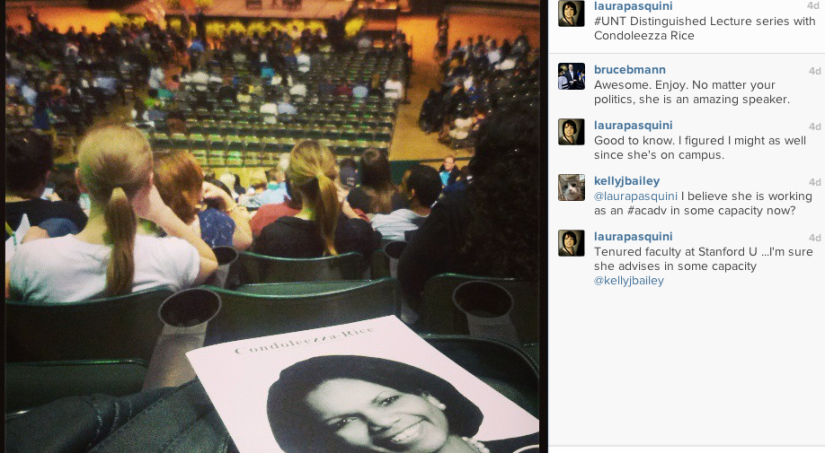 This comment, and listening to the talk, made me think about my own perspectives and bias. How often do we challenge ourselves to think in a new way? How can listening to another perspective better inform our decisions? How is it possible to bring groups in conflict together?  I think it is possible, and I know that I am not alone.

.@laurapasquini Too many dualistic minded people can’t comprehend having multiple feelings at once. you can support multiple causes. #sachat

Although “victory” has been seen this week, I don’t think that these events are really over. I challenge more of you to think about your influence and impact in social [media or not] spaces. What you say, tweet, blog, post, etc. influence the dialogue and community. It is easy to get [digital] high fives from friends and followers; however have you considered extending your reach to those you might not agree with? When is the last time you chatted with someone about the issues from this week who thinks differently than you do? Step away from the screen, and get to it.